An Insight into Schengen Countries, Visa, and the Schengen Area

In this article, we highlight the benefits of Schengen countries and the things you need to consider when travelling to the Schengen area.

Have you ever found yourself in endless queues at passport control when you travel overseas?
You look at the opposite queue, and people zoom past you with their Schengen visa or passport.

For the article, we will discuss the benefits of Schengen countries and the things you need to consider when traveling.

We will also consider a few countries which are part of the European Union (EU) as well as the Schengen area, some of which even offer citizenship to non-EU citizens.

Let’s dive into how to rid immigration officials of studying your documents and restricting your movement across Europe for business opportunities or leisure activities.

What is the Schengen Area?

Schengen Area is an area that includes 26 countries and follows a common travel policy for all travelers from across the world. Basically, all these countries act as a single jurisdiction for visas globally.

In one simple sentence; it grants people the right to move freely around most countries in Europe.

In a more elaborate sense, the Schengen visa removes the bureaucracy of obtaining a visa for each time you decide to travel.

There are 26 countries that form part of the Schengen area.

So what does this mean for those 26 countries?

Well, anyone who lives in any one of these 26 countries can easily and freely travel across other countries with no internal border checks or controls.

They wave goodbye to long waits at control points and restrictions across Europe and simply travel freely.

If you come from a developed country, odds are you can freely enter any of the Schengen countries without having to worry about getting a passport visa.

Schengen visas can often take a considerable amount of time to process and are only valid for a period of time. A Schengen visa can be denied, and there is no guarantee that it granted it would be renewed.

Let’s look into the Schengen area in numbers;

The economy as measured in GDP: $15 trillion. That is bigger than the economies of Canada, Russia, India, Brazil, Korea, Mexico, and Australia combined.

In other words, the Schengen area can be compared to one large country which follows shared common rules like:

In total there are 26 countries that form part of the Schengen area;

Other than these 26 mentions countries, there six other countries which are part of Europe but not part of the Schengen area.

Note: These countries do need a Schengen visa to visit the Schengen area for up to 90 days in a 180-day period.

Here is the Schengen Calculator to ensure you do not exceed your stay in one country.

The following individuals are eligible for unrestricted travel in the Schengen Area:

What to keep in mind;

You will always need a valid passport to travel to any Schengen country. Also, if you reside in a non-EU country, you will be required to obtain a stamp on your passport, irrelevant of the country you are entering. 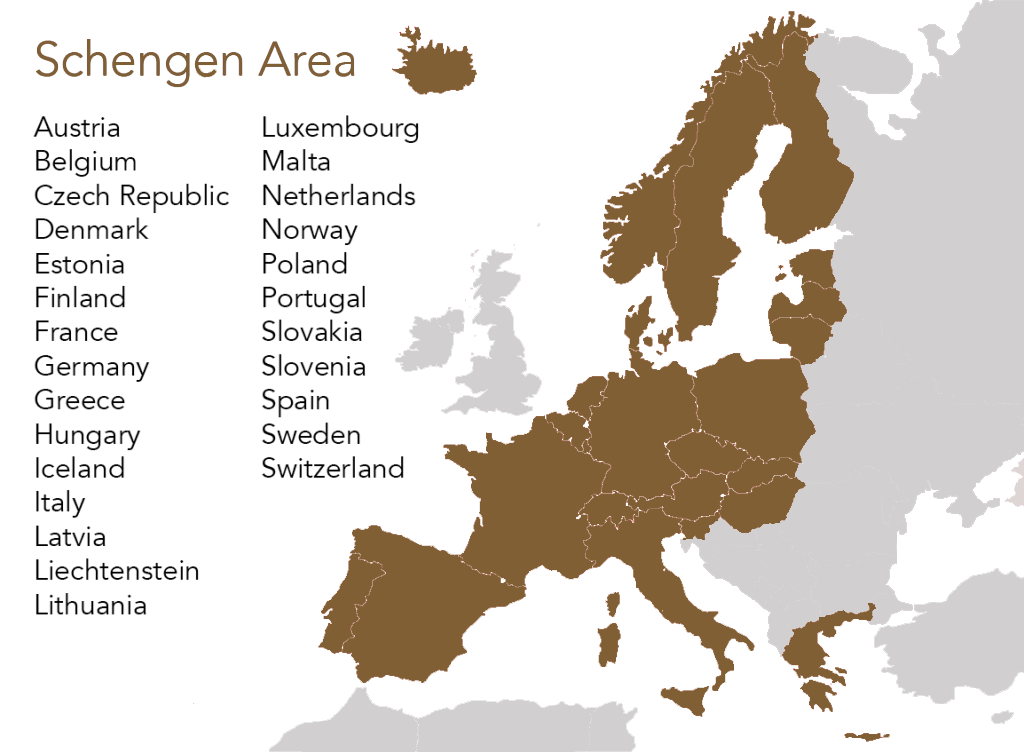 Difference between Schengen, EU, and Other Member states

Firstly, What is the EU?

As we mentioned above, 27 countries make up the European Union.

The European Union is a political and economic union that shares common rules and regulations.

Every member state is subject to the binding laws which hold the union together and promote peace, freedoms, justice, and security.

The EU also hosts free trade across borders to enhance the member states global economic growth and monetary union where all countries have the same currency; Euro (€).

When part of the EU, you can also travel freely to Iceland, Liechtenstein, Norway and Switzerland which are not part of the European Union.

Therefore, the Schengen area is primarily made up of those 26 European states which have come together to abolish passport and border controls.

For visitors to the EU, it effectively means that the Schengen Area acts as a single country, i.e. once you enter one Schengen country you have entered them all.

As you can already begin to imagine, forming part of the Schengen area as a host of benefits.

The benefits of a Schengen visa can be as simple as traveling from Germany to Luxembourg without having to go through passport control each time you cross the border.

Or, more complex things like moving goods and trades across borders.

The Schengen area has also reduced the time it takes to move goods across Europe.

In the past, it could take hours for trucks to cross certain borders; now, they may cross the border completely unnoticed.

This makes it much easier, quicker, and cheaper to move goods around Europe.

It can also be a step further as traveling across Europe, by which you will be entering several countries without any questions asked.

Therefore, one of the main advantages of Schengen Visa is that it saves you time. A lot of time.

This will also interfere if you conduct business internationally and need to travel regularly.

Another Schengen Visa benefit is that you will not need to go knocking on embassy or consulate doors each time you plan to leave the country.

This can be particularly stressful for those who come from a country that might not be favorably viewed.

One of the countries that reap the benefits of the European Schengen visa is Malta. We will discuss further the commonly asked question, ‘Is Malta a Schengen country?’.

Malta also happens to be one of the European countries that offers citizenship through investment which makes it the ideal place to apply for a Schengen visa and a more flexible passport.

Is Malta A Part of Schengen?

On the 21st of December 2007, the Island of Malta joined the free movement and visa-free implementation of Schengen.

At the time of Malta’s Schengen agreement, we also saw nine other countries follow suit to strengthen the Schengen state.

The eight other states who joined along with Malta are:

It is now possible for a Maltese citizen to travel from Malta to Paris or even Rome, from Barcelona to Brussels and from Amsterdam to Athens without border checks.

Once a person enters Malta, he or she enjoys the freedom of movement within the EU countries that are part of Schengen, this one of the essential advantages of the Schengen agreement.

Forming part of the Schengen area gives you a long list of opportunities as we noted above.

Among the benefits of Schengen countries is that you do not need to renew your visa each time you travel across borders.

The Schengen zone makes you a citizen of the world who enjoys freedom of movement.

With multiple entries into the Schengen countries, you can conduct further international business possibilities. Your family can also live, work and study in one of the European countries.